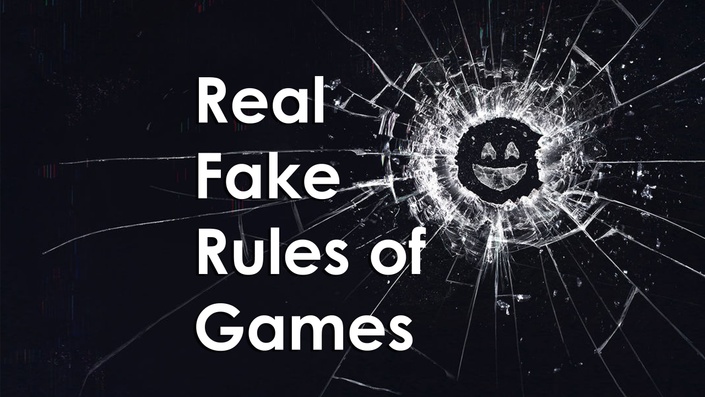 Black Mirror’s season fivepremiere Striking Vipers has an oddly coincidental connection to games and the “lusory agreement” the players follow when playing them.

If you haven’t see the episode yet, please note there are spoilers ahead (as well as sexually explicit content from the episode).

First we’re greeted by then 27 year old Danny Parker (Anthony Mackie) and his girlfriend Theo (Nicole Beharie). The episode opens with an interesting dialogue between them. When we are first introduced to them they appear to be strangers. But are then revealed to have been with each other for some time.

The couple leaves to return to their home to have sex. Afterwards, Danny is awoken by his roommate Karl Houghton (Yahya Abdul-Mateen II) to play a console fighting game called Striking Vipers as their characters of choice Lance and Roxette.

The episode then time jumps to 11 years in the future where Danny is hosting a BBQ at his home with Theo. The couple has a 5 year old child now and they have fallen out of contact with Karl. When Karl arrives he gifts Danny a birthday present: Striking Vipers X along with a virtual reality adapter to play the game.

The pair play the game online that night. In the virtual world they fight one match where they experience all of their character’s pain. Both Karl and Danny’s character’s fall into each other and they both kiss. Both are distraught and then immediately exit the game.

Over the course of the next few weeks, both Karl and Danny have sex with one another inside the game through their characters Lance and Roxette. Progressively, Danny becomes more withdrawn from this relationship with Theo.

Danny and Theo argue during their wedding anniversary. Theo shares she’s still considered attractive by other men, but that she’s dedicated to her relationship with Danny. Theo insists on wanting to know what’s happening with Danny, but he refuses to tell.

Danny locks away the game in a cabinet and tells Karl that they need to stop their virtual rendezvous. The pair don’t see each other again until Danny’s next birthday when Karl arrives at their home as a surprise.

Karl reveals that he hasn’t been able to recreate the feelings he’s had for Danny during the game. He effectively convinces Danny to rejoin him playing Striking Vipers X and they have sex once again. Danny decides that the two need to meet up again in real life.

During their in-person meetup, Danny asks Karl to kiss in their normal bodies to determine if there is any connection between them. They go through with it, but both feel nothing. The pair becomes angry with each other and begin to fight just when a police car passes.

Theo arrives to collect Danny from the police station. She’s frustrated and asks Danny what caused the fight. Danny reveals his story off-screen.

In the final scenes from the episode, it is revealed on their next wedding anniversary, Karl and Theo meetup online in Striking Vipers X while Theo goes to a bar to meet up with a stranger.